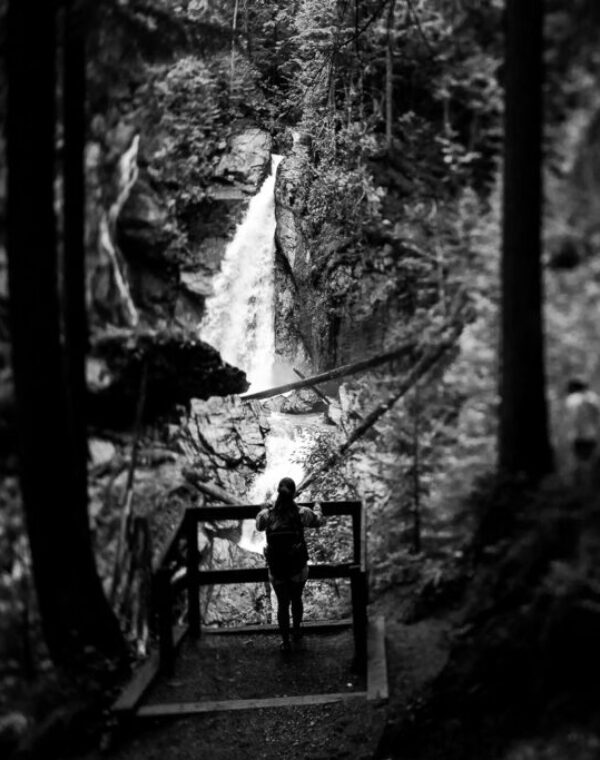 Things to do
in Revelstoke

The History of Revelstoke

A fire swept through the new townsite in May of 1885 leveling many of the buildings, but within two weeks, many of them were rebuilt. When the CPR reached here, they disputed Farwell’s claim to this land and, refusing to dealwith Farwell, located their station and yards east of his land. Click here for further reading.

Have you ever heard of “the Hanging Judge” and the “Wild West”? That’s what they called Matthew Begbie and the communities he served. He looked the part too – an imposing man at 6’5″ (195 cm), with white hair and a black moustache, who wore his judges robes wherever he held court. But only 27 of the 52 murder cases he heard in the history of the colony ended in hangings – and hanging was the punishment required by law for the crime of murder at that time, so if the verdict was “guilty” the judge didn’t have any choice. Click here for further reading.

Lord Strathcona drove the last spike and marked the completion of the Canadian Pacific Railway on November 7, 1885. This point marks an important landmark in the history of the railways in Canada and also symbolizes the national unity since the railroad links east and west Canada. Click here for further reading.

The Columbia originates in two lakes that lie between the Continental Divide and Selkirk mountain ranges in British Columbia. The river’s course is convoluted. It flows north for its first 200 or more miles, then it turns south and runs to the international border. Click here for further reading.

Major A. B. Rogers was hired in April 1881 by the railway company to find the Rogers pass with the promise of having the pass named after him and a $5000 bonus. Walter Moberly had discovered Eagle Pass just to the west, and based on suggestions in Moberly’s reports, Rogers started out from what is now Revelstoke, up the Illecillewaet River. Running out of food, Rogers and his party almost reached the summit but turned back feeling reasonably confident that a pass existed. Click here for further reading.

We use cookies on our website to give you the most relevant experience by remembering your preferences and repeat visits. By clicking “Accept All”, you consent to the use of ALL the cookies. However, you may visit "Cookie Settings" to provide a controlled consent.
Cookie SettingsAccept All
Manage consent

This website uses cookies to improve your experience while you navigate through the website. Out of these, the cookies that are categorized as necessary are stored on your browser as they are essential for the working of basic functionalities of the website. We also use third-party cookies that help us analyze and understand how you use this website. These cookies will be stored in your browser only with your consent. You also have the option to opt-out of these cookies. But opting out of some of these cookies may affect your browsing experience.
Necessary Always Enabled
Necessary cookies are absolutely essential for the website to function properly. These cookies ensure basic functionalities and security features of the website, anonymously.
Functional
Functional cookies help to perform certain functionalities like sharing the content of the website on social media platforms, collect feedbacks, and other third-party features.
Performance
Performance cookies are used to understand and analyze the key performance indexes of the website which helps in delivering a better user experience for the visitors.
Analytics
Analytical cookies are used to understand how visitors interact with the website. These cookies help provide information on metrics the number of visitors, bounce rate, traffic source, etc.
Advertisement
Advertisement cookies are used to provide visitors with relevant ads and marketing campaigns. These cookies track visitors across websites and collect information to provide customized ads.
Others
Other uncategorized cookies are those that are being analyzed and have not been classified into a category as yet.
SAVE & ACCEPT